NO LIFE BUT THIS: A Novel of Emily Warren Roebling is available on Amazon and Barnes & Noble.

It is biographical fiction based on the life of Emily Warren Roebling considered to be the first female field engineer and highly instrumental in the building of the Brooklyn Bridge.

Diane Vogel Ferri | No Life But This | Lakewood Public Library

Posted by Diane Vogel Ferri at 9:13 AM

Labels: No Life But This

No Life But This: A Novel of Emily Warren Roebling 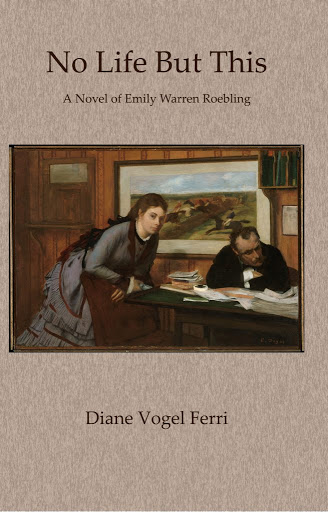 Diane Vogel Ferri is a teacher, poet and writer. Her essays have been published in Scene Magazine, Cleveland Christmas Memories, Raven’s Perch, and by Cleveland State University among others. Her poems can be found in numerous journals. Her chapbook, Liquid Rubies, was published by Pudding House. The Volume of Our Incongruity was published by Finishing Line Press. Diane’s essay, “I Will Sing for You” was featured at the Cleveland Humanities Fest in 2018. Her novel, The Desire Pathcan be found on Amazon. She is a graduate of Kent State University and holds an M.Ed from Cleveland State University.
Diane's new book is NO LIFE BUT THIS: A Novel of Emily Warren Roebling, published by ATBOSH Media.