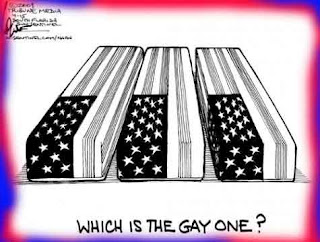 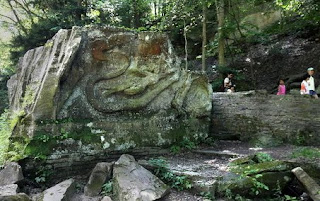 Only a few minutes from my house in an area of the magnificent Cleveland Metroparks system is Squaw Rock. The trails around it are cut into hilly prehistoric rock formations. If you walk just a short way from the parking lot you can see the sculpture. A blacksmith named Henry Church sculpted it into the rock near the Chagrin River in 1885 to tell the story of the Native Americans, which he called,"the rape of the Indians by the white man."

Into the sandstone he carved a quiver of arrows, a giant serpent, an eagle, a woman with a skull behind her and a baby in a papoose. The other side of the rock has an image of a log cabin and the first capital building in Washington DC.

You never know what you may find on a short walk in a park.
Posted by Diane Vogel Ferri at 5:11 PM No comments:

Immigration is certainly not a new problem. Native Americans used to call it White People.

For all our conceits about being the center of the universe, we live in a routine planet of a humdrum star stuck in an obscure corner...on an unexceptional galaxy which is one of about 100 billion galaxies... That is the fundamental fact of the universe we inhabit, and it is very good for us to understand that.
Carl Sagan, astronomer and writer (1934-1996)

Now is the time to understand that all your ideas of right and wrong were just a child's training wheels to be laid aside when you finally live with veracity and love.
Hafez
Posted by Diane Vogel Ferri at 6:20 PM 1 comment:

La Convivencia ("the Coexistence") is a term used to describe a postulated situation in Spanish history from the Muslim Umayyad conquest of Hispania in 711 to 1492 - concurrent with the Reconquista ("Reconquest") - when Jews, Muslims, and Catholics in Spain lived in relative peace together within the different kingdoms. The phrase often refers to the interplay of cultural ideas between the three groups, and ideas of religious tolerance.

Too bad this is ancient history...
Posted by Diane Vogel Ferri at 2:11 PM 1 comment: 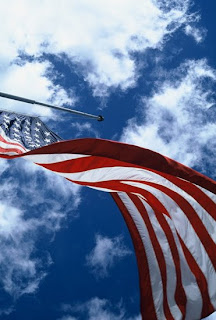 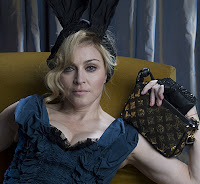 If at my age, I am still secretly comparing myself to images on television and in magazines I can only imagine what it's like for teenaged girls growing up in the age of Photoshop. Recently,Cleveland Plain Dealer columnist Connie Schultz reported on a popular website for 18-34 year olds called Jezebel.com. Whenever the website discovers unretouched photos of celebrities they post the before and after Photoshopped photos. One of their first ones was a photo of singer Faith Hill on the cover of Redbook in July 2007. Connie Schultz wrote "The difference between the two images was not just striking, but stomach-turning. Editors had digitally poofed up her hair, deflated her cheeks, shaved inches off her left arm and removed her right arm altogether. They erased fine lines from her face, the protruding clavicle from her chest and the tiny bit of back flesh blooming over the top of her sundress. Her previously small waist was whittled to the size of a 10 year-olds."

Why? What's wrong with being a naturally pretty woman? Why do magazines that are supposedly for women make us all look at images that are literally impossible to live up to?

For awhile I subscribed to a magazine called "More" because it was promoted as a magazine for women over 40. Great, I thought. But after awhile I became really annoyed with a section called "This is what 40 looks like, or 50 or 60..." But of course the women looked nowhere near those ages. I thought here we are again - being told to live up to perfection.

My favorite chuckle of every month is seeing how Oprah miraculously loses 30 or 40 pounds for her magazine cover and somehow gains it all back for the taping of her show. Who are they kidding???

Schultz quoted Jezebel editor Jessica Coen: Remember that every day a young woman somewhere sees one of these overly polished pictures for the first time... and has no idea that they're not real...She may well have no idea that most waists don't really bend without a roll of flesh, that a 40-year old woman actually does have some wrinkles, that no mascara will make one's lashes long enought to tickle her eyebrows. What the girl does know is that the pictures show What is Beautiful. She thinks they are reality. And maybe she doesn't have someone in her life to point out that this is complete and utter bullshit.

Above you can see an unretouched photo of Madonna looking like, well, kinda like a 52-year old woman who is in good shape. The Brittany Spears photo is a small example of retouching. You can click to enlarge.
Posted by Diane Vogel Ferri at 4:27 PM 2 comments: