It's the funeral march towards the end of the year,
just a number, just a month, with joy to the world

and a slithering trail of regrets gaining on me
like a holiday rattlesnake about to strike, sending poison

to the veiny, icy backs of my hands. Visions relentlessly
knock at the frosted windowpane in my mind,

not of fairies and plums, but that first wet snowflake
on the windshield, that sudden chord of a song,

a broken ornament, children who are no longer children,
what the year was not, and someone who is not here.

Silent snow falls on my winter sorrows, until I look up
from my lament and see God in your eyes.
Posted by Diane Vogel Ferri at 9:19 AM 4 comments: Links to this post

Peace on Earth - Peace to You. 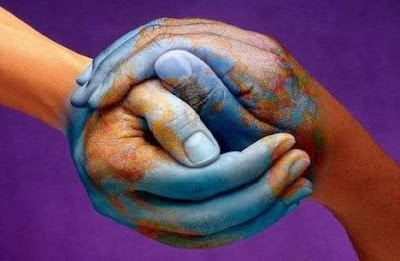 Posted by Diane Vogel Ferri at 2:46 PM 3 comments: Links to this post 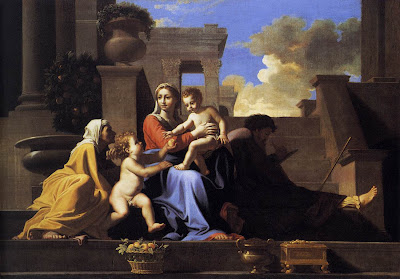 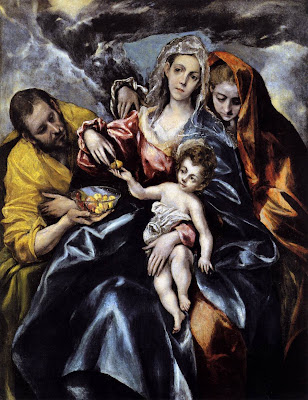 Sunday I had the opportunity to go on a personal guided tour at the Cleveland Museum of Art of Nativity paintings. The tour was led by a member of my choir who is also an art docent at the museum. (I also learned from the room with the large and magnificent paintings of five of the muses is that MUSE is where the word MUSEUM comes from! Also MUSIC! Somehow that never occured to me - but I digress.)

The painting at the top is The Holy Family on the Steps by Nicholas Poussin, a French painter (1594-1665). The other one is The Holy family with Mary Magdala by El Greco (1541-1614)These, and most of religious paintings we know today were required by the Catholic church of that time.

In both paintings Mary is shown wearing red and blue. The red signifies her humanness (blood) and the blue was to show that she belonged to heaven. The light shining down and brightening the baby and Mary's images is of course heavenly.Both paintings also contain fruit which tells us that God already tried to make a perfect human in Adam and Eve but the fruit brought the downfall of humans.

Having Mary Magdala in a painting with the baby Jesus is erroneous since she would have not been around then and also would have been closer to Jesus's age. It is thought that El Greco was required to put someone's relative in the painting and they called her Mary Magdala. Mary looks innocent, young and virginal next to the woman in scarlet.

In the Poussin painting Joseph is relegated to the shadows. This was the case in many of the paintings - showing his secondary part in the story.The significance of the family blocking the steps is to show that you can only get to the beautiful blue heavens through them. Elizabeth and John (the Baptist) are sitting with them.
Posted by Diane Vogel Ferri at 7:57 AM No comments: Links to this post

This article was posted today on a blog called "The Stranger" or "Slog. It was written by Dan Savage. The fact that this story is true - in America or anywhere- is almost beyond belief to me.

You would think that a school district at the center of a high-profile, bullying-related LGBT suicide would do something about to stop bullying. But you would be wrong.

The American Civil Liberties union today delivered a letter to the Tehachapi Unified School District in Tehachapi California, demanding that the school take steps to combat the anti-gay bullying that cost one Tehachapi student his life and is still making life hell for other LGBT students in the district.

Seth Walsh, a student who endured years of bullying and assault in Tehachapi schools, hanged himself from a plum tree in his family's backyard on September 19. Seth's mother found him. Seth was on life support for nine days and died on September 28. Seth Walsh was thirteen years old. Wendy Walsh contacted the ACLU after her son's death because she wanted to make sure that no other LBGT students would suffer what her son suffered.

"We went down to Tehachapi and talked with Seth's family, with his friends, and with other students," said Elizabath Gill, Staff Attorney for the ACLU's LGBT and AIDS project, "and we found that even after Seth's death the school district had not taken adequate steps to address anti-gay bullying. Some anti-gay bullying posters were put out and one school administrator was scheduled to attend one anti-harassment training session."

Seth, who came out to his parents in the sixth grade, cited the verbal and physical abuse he experienced at Tehachapi schools in the suicide note he left for his family. Seth's mother reported the harassment to school administrators before her son's death - and not only didn't school officials stop the harassment, the ACLU's investigation found, teachers and administrators encouraged and participated in the harassment:

One teacher called Seth "fruity" in front of an entire class. At one point kids were calling him anti-gay names in the hallway at school. A school administrator was right there and heard it all, and turned and walked away without doing anything.

The ACLU's letter outlines five steps - five simple steps - that the school district can take:
1. Have strong and clear anti-harassment policies and programs.
2. Take all complaints of harassment seriously and properly address them when they happen.
3. Provide ongoing training for students, teachers, school counselors and administrators.
4. Explain the harmful impact of harassment to students and staff.
5. Support Gay-Straight Alliances on campus.

The ACLU is calling on all schools to take the five steps. The ACLU is also calling for the passage of the federal Student Non-Discrimination Act (SDNA) which would add sexual orientation to existing federal laws that ban discrimination against students based on race, color, sex, religion, disability or national origin. The SDNA would also provide LGBT students and their families with legal recourse against schools that promote or tolerate harassment or discriminatory treatment.

This is me now - when will this society wake up to this discrimination? To this violation of civil rights for only one group of our society? Ask yourself - would any 13 year old CHOOSE to live this life, to be harassed, bullied, called names? Would you?
Posted by Diane Vogel Ferri at 6:47 PM No comments: Links to this post

Conceived in a scandal, born in a barn,
Jesus disrupts and disturbs fallow lives.

He offended his people by breaking their rules,
bringing not peace, but a sword

to vanquish the old ways, to unshackle the laws.
He was a dissident, an insurgent, a dent in the world.

There was no throne, just a stumbling stone,
no peace before or after that day.

Your waiting is ended this Christmas morn,
a soul choice is His unending gift.

He is here. All is changed.
Now in silence He waits for you.
Posted by Diane Vogel Ferri at 10:48 AM 2 comments: Links to this post

What If There Was A Day

What If There Was a Day

when nothing happened,
in between wars and elections,
storms, giant waves, quakes and funnel clouds?

Teams had the day off, strikes were averted,
traffic moved like a dream,
thieves and attackers took a break.

Reality shows were in rerun, mortgage rates
and the stock exchange remained as the day before.
No one was born, no one died.

Newspapers had nothing to print,
talking heads stopped talking,
all media were muted and stilled.

What if the cadence and rhythms of the planet
spun in harmony and coexistence
for just one day . . .
Posted by Diane Vogel Ferri at 2:02 PM 3 comments: Links to this post