Quotes for the Last Day of May

It is the mark of an educated mind to be able to entertain a thought without accepting it.
Aristotle

A chief event in life is the day in which we have encountered a mind that startled us.
Ralph Waldo Emerson

Go put your creed into your deed.
Ralph Waldo Emerson
Posted by Diane Vogel Ferri at 7:29 AM 1 comment: 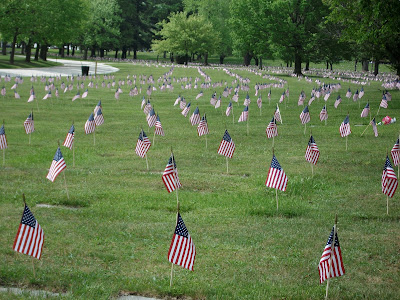 Stuff On My Mind

The other day I filled in for a second grade teacher. I was in the classroom for one hour and for that entire hour one little boy did nothing but tattle. It reminded me of many politicians during election time. Children are children and hopefully they will someday accept the old adage that if you can't say something nice, don't say anything at all. I said to the little boy "Sorry, but I can't hear tattling" and I covered my ears - just as I will do every election time, because grown-ups should know better.

The longer I live the less I understand politicians. So many of them claim to be "Christians". My assumption is that it is supposed to indicate to us that they are honest and trustworthy. As far as I know Christians still believe in the Bible and particularly the teachings of Jesus.

I guess I was reminded of how scripture is so often ignored (when it is convenient) by the rapture predictions of the weekend. The guy is still scratching his head wondering how his calculations could have been wrong, even though in Matthew 24 we are told that we will not know the hour He is coming - He will come like a thief in the night. Personally, I'm OK with that.

A great deal of what passes for current Christianity consists of denouncing other people's vices and faults. - Henry H. Williams

Being a teacher I have recently been made out to be a greedy, pampered slacker taking all the state's money, by our new governor. I join with gay people in wondering what the verse in Matthew 5 and John 15 and Galatians 5 (among many others) - love one another as I have loved you means to these people. I cannot find anywhere in the scriptures where Jesus puts conditions on that statement.

The devil loves nothing better than the intolerance of reformers. James Russell Lowell

Jesus also required us to take care of the poor and needy. There are over 300 biblical references to this. Yet most of Ohio's state budget cuts will involve $1 million cuts to food banks, $12 million from children's hospitals, $427 million from nursing homes, $15.9 million from adoption for special needs children, not to mention schools and libraries.

A decent provision for the poor is the true test of civilization. Samuel Johnson 1789

Mr. Kasich, however, has achieved a precedent in taking $31,400 in airplane trips in his first 80 days and given all his staff members raises. To be fair, he's not on the "I'm a Christian" bandwagon, but he was raised a Catholic and sends his children to Christian schools.

Even if you are not a Christian you may admire the teachings of Jesus - peaceful living, loving our neighbors and tolerance for those unlike ourselves. Jesus is my example of COEXISTING.

I struggle everyday with children who are unable to coexist with their peeers. They are defensive, angry and focused only on the actions of others. They tattle and complain to the point of being unable to do their schoolwork. They have some paranoia, always believing someone is picking a fight with them. I have not found the magic to make that stop. They may have learned this attitude at home, or do not have the personal security to be able to tolerate the faults and differences of others. It makes me sad to see children so unhappy with their surroundings. With my disabled students it is often an avoidance technique, but still sad.

I wish people in public officce would be good role models. They have the opportunity to set a different tone in this culture. There is enough heartache through things we cannot control like hurricanes and floods. And if they are Christians - which is NOT a requirement of public office in America - I might add, I wish they'd at least attempt to show us what a Christian is, given their great opportunity to do so. I don't know about you but I never did hear what Sarah Palin was going to do for this country because all I heard her say were criticisms of others. Not so Christian, but hey, I'm certainly not a perfect Christian - but I also don't use it as a public platform.

I desire so to conduct the affairs of this administration that if at the end .. I have lost every other friend on earth, I shall at least have one friend left, and that friend shall be inside of me. Abraham Lincoln
Posted by Diane Vogel Ferri at 4:40 PM 2 comments: 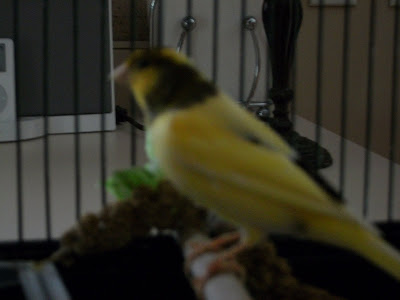 I had my first canary, Oliver, for 11 years and my second one, Sunny, for 8 years. Sunny died about a year ago and I have missed him ever since. I just didn't get around to fnding another canary - and apparently they are hard to find these days as well as pricy! Sunny didn't sing for his last several years, which I assumed was a result of old age. Then, a couple months before he died he sang again, but not with the gusto of earlier years. It was, of course, his "swan song."

The Friday before Mother's Day my daughter called and said she was coming over. She handed me a little cardboard box with holes in it and inside was the cutest little yellow and brown canary. I didn't know they came with colors other than yellow! I loved his markings and his personality immediately. He very comfortably hopped into the cage and almost immediately started chirping and singing - LOUDLY! He never stopped moving or singing, so by the next day I had an appropriate name for him - ROWDY!

This is not a very clear picture of ROWDY because he never stops moving! He is a joy. Somehow you cannot be blue with a canary singing it's heart out in your presense.

Thank you to my thoughtful, wonderful daughter.
Posted by Diane Vogel Ferri at 6:47 PM 1 comment:

Risk being unliked. Tell the truth as you understand it. If you're a writer you have a moral obligation to do this. And it is a revolutionary act. Truth is always subversive.
Anne Lamott
from Bird by Bird
Posted by Diane Vogel Ferri at 7:26 AM No comments:

It's Finally Spring in Cleveland!!

I just read a book by Mark Winegardner called "Crooked River Burning." It's a novel set in Cleveland and mentions every single Cleveland memory I have and every Cleveland event and celebrity from my childhood. Interesting. Here's a paragraph from the book that I could really relate to:

SUMMER NIGHTS! What is there to say about summer nights in Cleveland. This: Rock it, daddy-o! In Cleveland there is no spring. In Cleveland there is winter, then a wetter, meaner sort of winter (to be a Clevelander is to have a story about a ten-inch snowfall in April that you endured with good grace, a story you tell whenever the chance arises, to horrify Sun-belt pantywaists.) Then one day winter/wet-winter ends and, bingo-bango, it's summer time. After enduring what a person made of less-stern stuff than a Clevelander would confront in five winters, ten winters, maybe even a lifetime of winters, you've by god, earned your nine and one-half paradisiacal weeks of nighttime glory. You're Goldilocks baby, and you've spent some twenty-some weeks in the too-hard bed and twenty-some weeks in the too-soft, and you hit the sheets on Baby Bear's bed and you can't believe how heavenly it feels to feel just right. Just right!

But this an't no fairy tale, jack. Get your fairy tales the pantywaist hell out of Cleveland.
Posted by Diane Vogel Ferri at 6:40 PM 1 comment:

For My Daughter on Her Birthday

When you came
the leaves and lilacs came too

when you came
we were apprentices together

you brought forgiveness
and redemption for idle days

you brought love where
it had not existed before

when you came
I saw the world

as God made it
in your eyes

and I will never forget
the day you came
Posted by Diane Vogel Ferri at 4:40 PM 2 comments:

Frank Warren, sometimes called "the most trusted stranger in America," began collecting secrets for a community project in 2004. Since then more than 400,000 anonymous postcards from around the world have found their way to Warren's mailbox. The postcards have been featured in museum exhibitions, a popular music video, the best-selling Post Secrets books and an award-winning website. Here are some I found particularly touching from the book,"Post Secret, Confessions on Life, Death and God".

Even though I feel like I'm losing my faith in Christianity, I still hate the smug attitude of most atheists, that not believing in God is something only for smart people.

Rationally I think the idea of God makes no sense, but I cannot get rid of my FAITH no matter hard I try.

When two cars meet at night on a lonely road, when they dim their headlights for each other and their paths cross for that short moment during their journeys in opposite directions, I feel like I am NOT ALONE in this world.

I look for examples everyday that prove there is more good than evil in the world. I always find them.

Since life is so short, I feel I need to be active all the time. I feel guilty for taking time to RELAX.

When I was a little girl, the dance teacher stopped the class, made me hold my position and told the class to list all the things I was doing wrong. Every girl had something to say. I can still hear their voices when I dance.

I'm a Christian but I'm afraid to learn too much about God because I'm afraid it won't make sense and I'll stop believing.

Dear God, will you still love me if I believe in evolution??... My boyfriend won't.