Social Distancing Happy Hour - we each took a table. 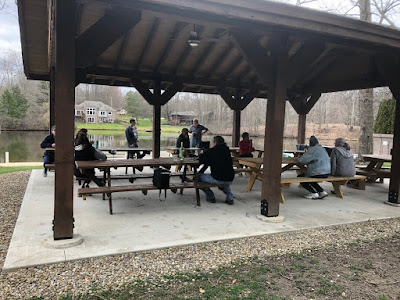 Posted by Diane Vogel Ferri at 10:55 AM No comments: 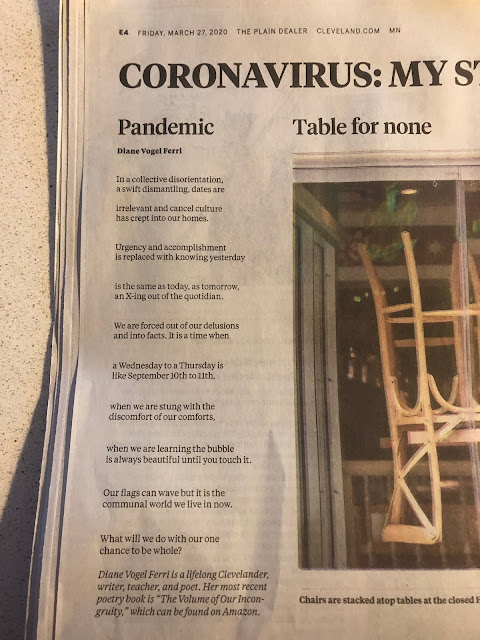 Posted by Diane Vogel Ferri at 10:53 AM No comments:

The Pandemic: Why Trump Will be Re-elected.

If I used this blog for ranting as much as I want to I would offend some people who do not agree with me. That would depend on actually having readers, which I do not have at the moment, so here I go:

Something unprecedented has happened in America. Something that involves every one of us. A pandemic called COVID-19. It started as a vague warning. The President made fun of it, called it a hoax, a Democratic effort to impeach him again. His lackeys at Fox News proclaimed it was just more hatred for the president. He had fired the pandemic experts. He is not a man who cares to listen to any expert, but has consistently fired people who know more than he does, and has not filled their posts. Firing is his thing. It’s his delusion of power. He had a reality show to fulfill his need for constant attention and to say, “You’re fired.

America quickly became knee-deep in a pandemic like the rest of the world.  So he tried to blame the CDC and Obama–––his go-to fall guy. He downplayed the seriousness of the virus, saying he didn’t think many tests would be needed. He gave mixed messages. He called for a travel ban to everywhere but places where he has golf resorts. He shook hands with people after the CDC told us all to have common sense and not do it. (He also looked into the sun during the solar eclipse), he undermined experts as they stood behind him with sick expressions on their faces. They know if they get up to the microphone and contradict him they’ll hear: “You’re fired.”

But here is what is going to happen.  Real experts are taking action. They are on the not-Fox news channels giving us the TRUTH, explaining the reality in clear, precise fashion. They are going to save us, but who will get the credit? The man who takes credit for everything, the man who calls himself a stable genius, with the best words. (After all, when he announced the National Emergency he told us those were “two very big words.”)

Why do I say his blunders and lack of leadership won’t stick to him? When a vile, misogynistic audio came out before the election it didn’t stick, when his Supreme Court nominee was accused of sexual assault, it didn’t stick, when he was impeached, when multiple women accused him of sexual harassment, when he cheated on his wives, when he made fun of Gold Star families, when he created a fraudulent university, declared bankruptcy over and over, made fun of disabled people, called other countries, “shit-holes,” when he didn’t release his taxes, when he didn’t get Mexico to pay for the wall, when he put his unqualified family members in positions of power, when his proven 16,000+ LIES didn’t make a difference to his followers, it didn’t stick. He may be the only human being in history to never suffer a consequence for anything.  And he won’t now either.

In addition, he has the luck of the Democratic campaigns coming to a screeching halt.

I hope to God I'm wrong.

Posted by Diane Vogel Ferri at 11:20 AM No comments:

Dear Coexist Blog,
Well, I have neglected you once again. You were born in September of 2007, and you were a brand new thrilling way to have a voice in this world. (You came along before Facebook.) There were many other bloggers out there and we constantly encouraged each other and seriously considered everything the others had to say. We consistently wrote thoughtful comments to each other.
But after a few years of glorious self-expression, I realized that other bloggers were the only people reading my posts. I also realized that I only read theirs so they would read mine. This made me sad. No one was truly considering my deep thoughts, reading my sappy poems, or otherwise caring about me as a writer. They were racing through the post to write what might pass for a significant comment––just like I was––so I would read their post.
So, I got discouraged. I got distracted with writing novels, poetry collections, and essays. I spent time taking classes and learning about the craft of writing.  I retired from teaching and had time to volunteer, help with grandchildren, and write to my heart's content.
I would like to let you go, dear old friend, but you are all over Google. If someone (like a publisher or agent) Googles me to see what I've written recently they will be disappointed at this old blog. I've had essays published and two poetry books. I've written my third novel.
My poetry is SO much better than in 2007. My writing is SO much better than in 2007.

So what do I do with you? I want to rant about politics and climate change and the 2020 election and the horrible state of the public schools and on and on.... but no one wants to read that. Opinions and rants and complaints are rampant everywhere you look, thanks, in part, to social media. On some days I slam my laptop shut with anger over everyone's self-righteous (and often uninformed) opinions on Facebook.  I'm sick to death of opinions even though I have so many myself.
I have a Facebook Author Page for news about poetry readings etc. I try not to post too much on Facebook, but when I do it is very clear what my stance on the subject is. So I don't need a place to vent opinions any longer, do I?

I guess I'll try to pop in once in a while and write something thoughtful–––just in case someone is out there.

Posted by Diane Vogel Ferri at 4:00 PM No comments: