February 20, 2015 would have been my Dad's 92nd birthday.
This birthday will have no pain or suffering.

I want to touch your hands again.
I memorized the shape of every finger;
the ones that held, fixed, carried, loved.

The hands I clutched on your last walk on this earth
after sixty years of steps
across the living room and back.

Then for two days we circled, spoke in your ear,
held those hands, wept, questioned,
and we were one - covered in your final gift.

You know the glory now, Dad,
the reward for always choosing love -
and we are bereft here

on the surface of this incendiary planet
to wait
and wonder. 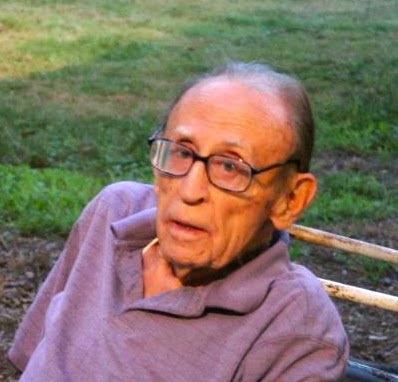 Posted by Diane Vogel Ferri at 9:43 AM 2 comments: Links to this post

What I Have Learned From Caregiving

About two years ago both of my parents became ill at the same time and were not able to take care of themselves, their home or their finances.  After some painful confrontations they slowly allowed us to know more about their formerly private lives.  As the months went on they were in and out of hospitals and rehabilitation facilities - sometimes in two different places at once and they needed knowledgeable advocates everywhere they went.

It is easy to step in and do laundry, shopping, cleaning, cooking and transporting. But caregiving is much more than that and involves a lot of personal sacrifice. At first it is a shock. Suddenly everything has changed for all the people involved and there is no choice but to do what is needed whether you think you have the time or not.  There are also events in which you see and do very unpleasant things you never thought you would.

One of the most stressful parts is the responsibility of making decisions for my parents as well as navigating the medical system for them.  If someone is not present when a loved one comes to a hospital there are many things that can go wrong.  We have had to fight battles to get them what they have needed over the past two years. We have fought to change doctors and medications and whether to send them off to yet another facility. I often ask myself what happens to someone who has no one to do that for them.

There have been numerous calls in the middle of the night that someone has fallen and when I got there I still had to decide whether he or she was hurt and whether to call 911 and put them through the ordeal of an ambulance and yet another hospital stay. It is just horrible to see your frightened mother or father loaded into an ambulance. You somehow feel responsible for their suffering in those situations.

There are so many moments that remind me of caring for a young child - the responsibility, the worries, the need for respite sometimes too.  But with adults you are dealing with their emotions, pride and dignity as well. There have been constant battles over for the best medical and financial decisions for them. Doctors do not tell you what to do, but give you options and it is often the caregiver's decision.  Did I make the right one?  This is a tough position to be in when it is your parent.

Everyone has suggestions for you but everything you put in place takes time and often the problem is immediate. We have hired helpers but they have often been useless or caused more problems. We have had them enrolled in various programs for home health care which is always a long intake process and then suddenly they are dismissed and we are back to square one.  We have sometimes decided to go against the doctor's suggestion for rehab and brought them home to care for them ourselves.

But what have I learned from all this?  I have learned that there is nothing I have to do that is more important than being there for my parents. I slowly gave up all my activities because I so often had to miss them. I stopped making commitments for the same reason.  Have I survived it? Of course.  I have learned to do what is needed when it is needed, not on my own schedule.  I'm a pretty routine kind of person so this was not easy for me at first.

I guess flexibility is the word.  I start the day now knowing that there is nothing that can happen that I cannot handle. In the beginning it was constant stress at the unknown and distress at missing work or other things I had planned. I have had to remember that I am not the one suffering - they are.  I guess I'm just saying it's made me a better person and I wouldn't have it any other way.

My sister and I vowed to keep our parents in their beloved home of 61 years if at all possible. We  sacrificed to make that happen for my father who passed away in November. He was there until his last two days at the hospital (and that decision was made by hospice). He never knew he had left home.  Now we are trying desperately to do the same for my mother.

We will never regret that decision or anything else.

Posted by Diane Vogel Ferri at 11:00 AM No comments: Links to this post